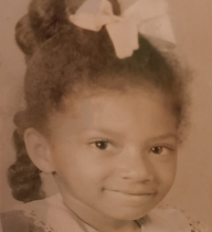 I wanted to go back and get my red sweater. I had left it on the chair in the waiting area. But momma said we should leave it for someone who needed more than I did. That was ok with me because we were finally leaving that place and going home. No more being snatched out of bed in the middle of the night. No more being strapped to a chair while they stuck tubes up my nose. No more group baths. No more yellow grits. And no more missing my momma and daddy! After weeks, that seemed like forever, my brother and I were going home.

I do not remember much about being four years old. But I still remember sitting in the doctor’s office and hearing him tell my mother that we had symptoms and had to go to the hospital. A couple of days later, my six-year-old brother and my four-year-old self watched our parents leave this strange place without us. We were hundreds of miles away from everyone and everything we knew.

The only moment of comfort I remember while being in that place was the weekend snack. One day a week, as a group, all the children were allowed to watch television. On that day, we were given a snack. We received a graham cracker and a cup of grape juice. To this day, I can not eat a graham cracker without thinking about those days.

I wish I could say that I was not impacted by the trauma of the separation and the medical procedures that we had to go through. But the truth is, I think about it often. Sometimes when I think about that time, a sadness comes over me. And I find myself wiping tears from my face. I do not cry for my four-year-old self. I cry for my parents. I cry for a mother who had to leave behind her babies. I cry for helpless parents who could do nothing but wait. Wait for someone to tell them if their children were going to be ok.

Decades later, I decided to ask my mother some questions about that time. I asked her how they explained to us that we had to be taken away. And that we were going to be gone for a long time. And I wanted to know how we responded to what they told us. She said that she remembered my daddy and brother crying. She remembered me hugging her and telling her that “If that is what we have to do to get better then we have to go.” I wanted to know more. I needed to fill in some of the gaps. But I could see the tears in her eyes as she answered. So, I re-closed the book.

After that brief conversation with my mother, I had a new question. What four-year-old says something like that? As a four-year-old, I really could not fully understand what my parents were telling me. I could not fully conceive the magnitude of the situation. I just wanted to be obedient and please them. I wanted to comfort them. Because I knew that they loved me, and I had faith in them. I knew they were doing what was best for me. And if they said it was going to be ok, then it was going to be ok. And they were right. After weeks of medical procedures and observation, the results showed that my brother and I did not have tuberculosis. We were perfectly healthy children.

The older I get, the more I learn from this experience of four-year-old me. The memories make me evaluate my faith. Do I have the faith of a four-year-old? As children, our parents are representations of God. They created us. They provide for us. They teach us. They protect us. They love us. They do what is best for us, even if it hurts them. And, as in my case, sometimes they are our saviors.

When I view things from that perspective, I realize that God, my Heavenly Father, wants the grown-up me to respond to him the same way four-year-old me responded to my parents. He wants me to trust in him and to have that same “because he said so faith” as that four-year-old. God wants me to live Proverbs 3:5-6. He wants me to trust in him with all my heart and not lean on my own understanding. In every situation, He wants me to think about what he wants. And when I do, He helps me to go the right path. God wants me to know that whatever the circumstances, “… all things work together for good to them that love God, to them who are called according to his purpose (Romans 8:28).”

Like earthly parents, God does what is best for his children because he loves them. God loves me so much that he gave his Son’s life for me. Like a four-year-old, I can have true faith in and a desire to please a Father who loves me that much. Like that four-year-old, I can be ready when he comes to take me home.